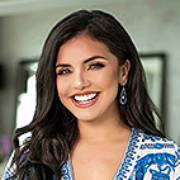 Karen Hoyos is a Global Transformational Leader, Celebrity Coach, Coach of Coaches, International Speaker, and successful Entrepreneur. With over 40 thousand graduates of her seminars worldwide, Karen Hoyos personally coaches Hollywood celebrities, athletes, politicians, entrepreneurs, and other coaches. She has an honorary PhD in Psychology and Coaching Mastery from Logos International University of Florida for her distinguished international transformational work. Karen is often featured as an expert guest on networks such as NBC, E! Entertainment Television, CNN, Univision, and Telemundo.

In March 2019, Karen’s book, Purpose: The Ultimate Quest was published. Karen Hoyos was chosen as one of the U.S. seven most inspiring women, second to singer Shakira by international magazine “Siempre Mujer”. A 2018 alumna of the Schusterman Reality program, Karen embarked on humanitarian missions with the United Nations (UN) and organizations in America and Africa. A Keynote Speaker on many prestigious stages including Carnegie Hall and Harvard University, she is sought to awaken, refresh, and transform millions of lives around the world.

← Back to 2019 Latino Leadership Conference