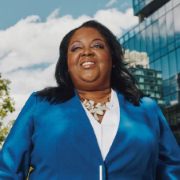 Enna is a senior IT and Business Professional with expertise in Quality Assurance Management and Team Restructuring and Transformation. Her career spans over 25 years of working in multiple industries such as financial services, education, advertising and many software and startup companies. Currently, Enna is the Head of the QA function for the Civil Identity Business Unit at IDEMIA, an augmented identity security organization. She has a huge passion for Diversity and Inclusion, talent engagement and community organizations. Enna received the 2018 Inspirational Woman Award from Centro de Latinas, MARIA. For two consecutive years, 2017 and 2016, Enna was named as one of the 100 Most Influential Leaders for the Latino community in MA by El Planeta Newspaper and she was the recipient of the Year Up Outstanding Manager Award in January 2014. Enna is the President of the Association of Latino Professionals For America (ALPFA) Boston Chapter, a nationally recognized Latino organization whose mission is to empower and develop Latino men and women as leaders of character for the nation. Through Enna’s leadership, ALPFA Boston Chapter received the 2018 Leader Chapter of the Year Award.

Enna was appointed by Governor Baker to the Latino Advisory Commission for the State of MA and to the Commonwealth Corporation Board of Directors. Enna sits on various Boards: Argyle CIO Advisory Board; Hyde Square Task Force Board of Directors; Beaver Country Day School Board of Trustee; and Southern Jamaica Plain Health Center Board of Directors. She served a 2- year term as SVP of Project Management Office to the ALPFA Boston Board (2015-2016) and served as Chair, Programming Committee (2014-2015). In 2016, Enna completed her term as Simmons College Board of Trustee and a 3-year term as President, Simmons College Alumnae Association Executive Board. Enna is a Certified SAFe 4 Practitioner (SP) from Scaled Agile Inc. Enna is a 2012 graduate from The Partnership Fellows Leadership program and is a Certified Software Testing Professional from the International Institute for Software Testing. Enna earned her Bachelor of Science from Simmons College as a double major in Computer Science and Spanish and a Certificate from the Simmons Graduate School of Management Executive Leadership Program.

Prior to joining IDEMIA, Enna led QA teams at Eastern Bank and Kronos. Enna spent 6 years at Wellington Management as VP of Quality Assurance where she managed the QMC QA function across all IT teams, responsible for the centralized testing, test automation, infrastructure, performance, mobility testing and test data management. Managed a budget of over $11M with an onshore/offshore team of 150 resources. Enna also worked as Director of Quality Assurance at Bluestreak, a multi-product online media marketing company. Prior to that, Enna provided over-all leadership, at FirstMarblehead, for a centralized QA organization of over 40 employees that serviced IT, Business, Operations and external vendor groups. Created strong automation and performance teams that helped reduce testing efforts and increased testing coverage. She managed and controlled department budget exceeding $1 million. Enna also worked at Massachusetts Financial Services in various QA groups for 6 years.