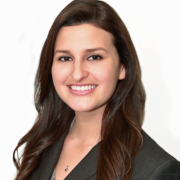 Adriana Ramos is a Senior Advisor in Edison International’s Public Affairs unit, a position she has held since 2016, and provides support to Edison’s Washington, D.C. and Sacramento offices by reviewing legislation, engaging with the company’s subject matter experts and lobbyists, developing position letters and responding to inquiries from elected officials and staff. Adriana also manages the legislative and regulatory policy support to Edison’s affiliate companies and public policy support to the CEO and President’s offices. Adriana serves as the President for Latinos for Engagement, Advancement & Development (LEAD), an Edison Business Resource Group dedicated to supporting the professional development of its members.
Adriana first joined Edison in 2014 as a Local Public Affairs Region Manager, where she served as a company liaison to governmental agencies, businesses and community leaders in the Inland Empire to promote Southern California Edison projects and business initiatives.
Prior to joining Edison, Adriana practiced law with a municipal law firm, where she advised local government agencies on public policies and litigation strategies. She served as the Assistant City Attorney for a city in the Inland Empire and as Deputy City Attorney for cities across California. Adriana earned her J.D. from the University of California, Berkeley School of Law, and bachelor’s degrees in Criminology, Law & Society and Psychology & Social Behavior from the University of California, Irvine.