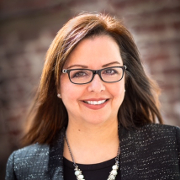 Anna Dapelo-Garcia is a health care administrator for Stanford Health Care in Palo Alto, California. She has a Bachelor’s of Arts in management from St. Mary’s College in Moraga, California and a Master’s in Public Administration, with a concentration in health services from the University of San Francisco. In 2013, Anna received a Women of Influence award by the Silicon Valley Business Journal and was named as the 2017 Woman of the Year by the Women’s Health Care Executives. She serves on several boards including the University of San Francisco and the Hispanic Foundation of Silicon Valley. She was also appointed as a California State Commissioner for the Senate Advisory Commission on Cost Control in State Government. In 2015, she became the Founder of Lean In Latinas and was appointed as a Regional Program Leader by LeanIn.Org