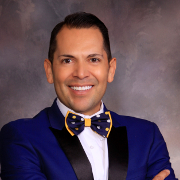 Mark L. Madrid is CEO of the Latino Business Action Network (LBAN), a non-profit 501(c)(3) organization focused on strengthening America through funding Latino research and education impact programs at Stanford University. The goal of LBAN is to double the number of $10+ million, $100+ million, $1+ billion Latino-owned businesses in the U.S. by 2025.
Previously, Mark served as President/CEO of the Greater Austin Hispanic Chamber of Commerce, the 2015 United States Hispanic Chamber of the Year. Prior to serving in nonprofit executive roles, Madrid enjoyed a flourishing career in banking that began on Wall Street in 1995 with J.P. Morgan.
In 2016 Mark was appointed to serve on the board of the McCoy College of Business Administration at Texas State University and was recognized by both his alma maters, the University of Texas at Austin and the University of Notre Dame. He was awarded the Community Emerging Legacy Award by the University of Texas at Austin Division of Diversity and Community Engagement. The University of Notre Dame Mendoza College of Business named him the recipient of Mendoza’s Alumni Service Award.
During the 2015 Notre Dame Mendoza College of Business Graduate Business Diploma Ceremony, Mark was honored with the Rev. Theodore M. Hesburgh, CSC Founder’s Award and the David J. LaBarre Community Service Award.
The Rev. Theodore M. Hesburgh, CSC Founder’s Award is given to one University of Notre Dame Master of Nonprofit Administration (MNA) student who is highly-regarded by the University of Notre Dame Mendoza College of Business faculty, possesses the integrity and character consistent with Notre Dame and displays leadership and scholarship within the Mendoza College of Business.
The David J. LaBarre Community Service Award is given to one Master of Nonprofit Administration (MNA) student who is highly-regarded by his/her fellow MNA classmates, possesses the integrity and character consistent with Notre Dame, demonstrates a willingness to help other students and displays a commitment to both Notre Dame and surrounding communities.
Mark is recipient of the Jefferson Award. He is a United States Army Honorary Colonel and a member of the Forbes Nonprofit Council. In May 2018 the San Francisco Business Times named Mark one of ten OUTstanding Voices in the Bay Area for his standout presence as a role model in advocating for a safer, more inclusive space for LGBTQ employees. In August 2017, the United States Hispanic Chamber of Commerce named Mark the LGBT Advocate of the Year. In October 2017, Mark was appointed to the Honorary Advisory Board of The National Veterans Opportunity Coalition.
Mark holds a BBA from the University of Texas at Austin McCombs School of Business, where he graduated with Honors and earned the designation as an Endowed Presidential Scholar. He graduated Cum Laude with a Master in Nonprofit Administration from the University of Notre Dame Mendoza College of Business. He is an alumnus of the Stanford Latino Entrepreneurship Initiative Education-Scaling Program.
Latino Leaders Magazine named Mark one of the nation’s top Latinos in the areas of finance and nonprofits. He was honored as an inaugural Texas Modern Hispanic Gentlemen by Texas Monthly and as a Houston Business Journal 40 Under 40. In 2015 Austin Mayor Steve Adler appointed Mark as Co-Chair of former President Barack Obama’s My Brother’s Keeper (MBK) Austin initiative. MBK’s goal is to ensure that all youth, including boys and young men of color, have opportunities to improve their life outcomes and overcome barriers to success.
Mark serves as a mentor for the University of Texas at Austin LBJ School of Public Affairs Executive Master in Public Leadership (EMPL) program. He is a former McBee Fellow for the Austin Area Research Organization (AARO). AARO is a non-partisan nonprofit organization that builds on the savvy and brainpower of 100 prominent leaders from the Central Texas region of Travis, Williamson, Hays, Caldwell, Bastrop and Burnet counties. As well, he serves on the Board of Directors for the Central Texas Regional office of the Anti-Defamation League (ADL) in Austin.
Mark created the Mark L. Madrid Scholarships, which are awarded to deserving Latina and Latino college students majoring in business from the University of Texas at Austin, the University of Notre Dame and Texas State University.
Mark is best known for his passion and, most importantly, his compassion. His favorite symbol is the lightning bolt, which embodies energy and enthusiasm. He has been featured in Forbes, the San Francisco Business Times, the Silicon Valley Business Journal, the Austin Business Journal and the Houston Business Journal. Those who know Mark all agree that he represents this symbol extremely well. Mark loves his God, his family, his friends, his pet Champ. His solitude joy is his zeal for competitive running, and he is currently training to qualify for the Boston Marathon after placing in his division in several half marathons, 10Ks and 5Ks. He has the strongest passion for our Hispanic community, our Latinx entrepreneurs and our students.