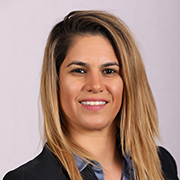 Angelita has been with GE since 2012 and prior to GE Healthcare Angelita worked in GE Oil & Gas. After spending 10 years in Oil & Gas Angelita moved into GE Healthcare January of 2017. She relocated from Houston, Tx to Southern California in 2018. She is currently an Account Manager seeing over territory in 3 states. Throughout her professional career she has held a variety of roles ranging from Information Systems, Operations and Commercial. She has been active in the community for organizations such as INROADs and Junior Achievement. While in Houston she was a leader in GE’s Hispanic forum. Currently she is on the GE Diversity & Inclusion Advisory Board. Angelita graduated from Arizona State University with a degree in Global Business.