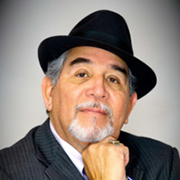 Carlos E. Solórzano-Cuadra immigrated from Nicaragua to New York in 1969, he came as a scholarship recipient from the MAMENIC LINE, a merchant marine company from Nicaragua, after a short sting as a merchant marine, and enjoying being a hippie for a while, he decided to establish himself in New York, he served in the US Marine Corps and is a veteran of the Viet Nam era. He attended schools in New York, California and other states.

As a Latino immigrant from Nicaragua, to the USA via New York and California, he has been in the USA for over 50 years, he is a US Marine veteran and a Small Business owner (Multi Vision Latina, LLC). he has worked on almost everything you can think of; from construction, to dishwasher, to waiter, to cook, to janitor, to factories, to picking up fruit at orchards, to painting, to sales, to computer programing, and always with a mindset to educate himself, to be his own boss, and to have his own business. He graduated from High School in Nicaragua, but for faster enrollment in US schools, he also got his GED and went to college for over 13 years to finish and still studying to better himself. He has been involved in community and business activism from the beginning for over 30 years, from being discriminated in the military to feel it at work and directly on him and his family, always knowing he is better than that.

He moved to California and he became involved in community and small business organizer. He is the President and founder of Multi Vision Latina, LLC (MVL), a leading International Multi Services, Business consulting and public relations agency, established in the US in 2007. MVL is an MBE and LBE certified company. He formerly worked at By Design Multimedia an event and public relations agency for over 15 years.

He has worked in the field of business consulting, and public relations for over thirty years. Carlos has an extensive background in business startups, business planning, strategic marketing, communications, media research, and public relations. Through his commitment and experience, he has been able to represent the Latino community and his clientele at various levels of success within the private sector and government.

In his work he has commercial and affiliates agreements within the US and Latin America and provides multi services consulting in strategic import-expo multi-cultural markets.

He offers the simple premise that it is every client’s right to have direct counsel and service by the firm’s principal. Carlos takes a hands-on approach to the creation and implementation of client programs that consistently produce great results.

His dedication and the ability to work-in with diverse segments of the business community, has been an invaluable tool to develop his business, serve the community and to be able to connect and bring in new clients.

He seats in various non-profit organization as he feels that is a moral obligation from every [email protected] professional to help our communities. He is currently an advisor to the Center for Economic Independence of Women and Youth Foundation and seats on the Legislative and International Trade committees on the California Hispanic Chambers of Commerce.

He is founder and current CEO of the Hispanic Chambers of Commerce of San Francisco and the Latin American & Caribbean Business Chamber of Commerce Northern California, a recipient of the Hispanic Business Leader Recognition Award from Telemundo, and the California Hispanic Chambers of Commerce Northern Region, 2009, the Monja Blanca Innovative Awards from the Cultural Center of Guatemala, 2011, and the Leadership Award from the Latin Business Network of San Francisco, 2012. He received the Executive of the Year award by the CHCC 2016, CHCC Northern Region Business of the Year Award 2018, and several commendations from the Assembly and the Senate of the State of California for several years and more recently in 2019. He is certified as Business and International Trade Consultant by the SBDC and the SBA, and has several certifications from the Non-Profit Management Executive program of the Mendoza College of Business, Notre Dame University.

He is married to Martha Vaughan a Nicaraguan American artist, singer, entertainer and a realtor in San Francisco and the Bay Area. He has 3 children Dax, Joshua and Ryan and 3 stepchildren Tatiana, Pavel and Emiliano.